It is common knowledge that a photographer will be judged not on his/her best photo but on the worst. This can cause a dilemma when posting photos that are not in the fine art category but more documentary. These photos may contain flaws of lighting, background, expression, or composition. But they are still worth posting for their inherit value. The value may be only to one person or many. This is a whimsical photo from a recent shoot and an example of “learn the rules, then break them.” Notice the reflection of the umbrella in the sunglasses which I purposely left in the photo. To see all of the photos, go to Gallery/Events/The Artful Table 2012. 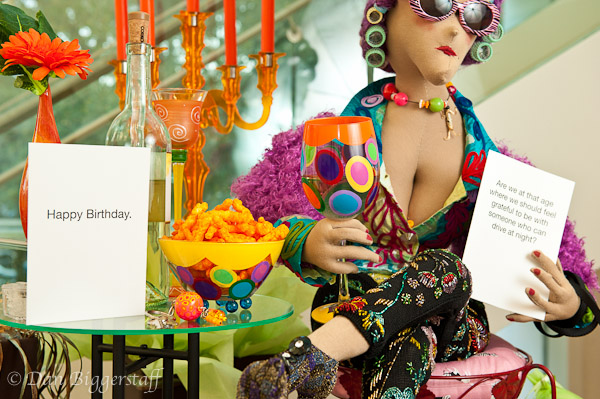 I first posted this as an addition to the About Me page on the website but decided readers would better access the information if I put it in my blog.

This photo of Jay (on the right) and me was taken by Jamie Smith, Jay’s Workshop Producer.

After thoughts, some random, some not: Who is Jay Maisel? A video produced by Kelby Training, A Day With Jay Maisel, was a good intro and enough to perk my curiosity. Shortly thereafter, my wife and I made reservations for the workshop. As the time approached, I felt like a kid a few days before Christmas, and my anticipation turned out to be well-founded. Following Jay’s advise in his videos (the first mentioned above, the second one, Another Day With Jay Maisel) and to my wife’s dismay, I purchased black shirts, black pants, and comfortable black shoes – this outfit helps make you invisible when shooting on the street, a Jay true-ism. My wife is not used to seeing me in Zorro-black.

So much information was crammed into 5 short days that flew by. No reason to reinvent the wheel, my latest lens is the 28-300 mm Nikon – this was the only lens I took to the workshop and the one Jay uses most frequently. Another “Jay-ism” is the more lenses you take, the less you shoot. Right again. By the way, Jay is a self-proclaimed Nikon junkie, but we had several users of the “other brand” in the class.  The equipment bag I recently took to the Egypt workshop weighed about 40 pounds and was a back-breaker. One body and one lens is the thing dreams are made of when preparing for a shoot. Also, no filters, with rare exception, and no lens hoods. “Use your damn hand above the end of the lens if you need shade.” Jay has had to replace a few lenses over the years but does not like the distortion created by filters – the lens hood makes the lens more intimidating on the street. At the bottom of the recommended equipment list for the workshop is a tripod, “if you want.” When I return for Jay’s Alumni Workshop, the tripod stays at home. Obviously I do use a tripod when needed and polarizing and neutral density filters when appropriate.

You cannot take a photo if you do not have a camera (Jay tru-ism). Some interesting photos have even come from the water closet.  Keep the camera with you! Some of the newer digital cameras give amazing photos in low light, hand held using ISO’s of 1600 and above. Prior to the workshop, I would rarely go above 800, and was usually shooting 200 or 400.

Jay has two buttons, tough guy and pussy cat. Being of the female persuasion is a definite advantage when the second button is needed, and his daughter is obviously the queen of second-button clan. Seriously, he is a wonderful human being with a gift for photography and more importantly in my opinion, teaching the art. Regarding the workshop, I cannot tell you how important his assistants Jamie and John were in making the it successful – highly, no very highly, knowledgeable about cameras and computers and software, and, and, and.

Light, gesture, and color – and you are responsible for every square millimeter of your photograph – yes, when you take it, not after you have altered the photo with “some fancy-dancy software.”  If it does not add anything to the picture, do not include it; no unintended distractions.

Jay was a very gracious host, sharing his magnificent home, extensive photographs, phenomenal “things collections,” knowledge of the craft and art, and most importantly himself. The workshop participants were expected to by on the streets of Manhattan, shooting by 6:30 AM. Have I mentioned food? After early AM shooting, the day started with a light breakfast at his home and continued with lunch and dinner at favorite neighborhood  restaurants, all really good, and several in the excellent category. Back from a temporary diversion, there are many aspects to a photograph, light and color, but most importantly gesture. If there is no gesture, the photo is not worth taking, and certainly not worth looking at or asking anyone else to spend their time. The ultimate source for explanation of gesture is Jay Maisel. Jay Maisel I am not, but he certainly contributed to who I will ultimately be as a photographer and a human being. I now have an awareness, not there before my week in Manhattan. We all have people in our lives who have made an impact, our parents, a close friend, a teacher, maybe even someone famous – no question that Jay is on many lists.

Unless you are using a point-and-shoot camera just for family and vacation photos, photography has many aspects, some obvious, some not so obvious. The technical and artistic components are complex, but so can the business of photography be multifaceted. I … Continue reading →

A friend recently said “I want to take a great photo.” He is a good photographer but has limited experience. My advice, basic knowledge is an obvious necessity, and then shoot and shoot and shoot. But when you are shooting, only take “good” photos. And, probably the most important ingredient is “have fun.” The photo not only shows the subject, but also the photographer. That great photo is not something that most of us can choose to take at a specific time but is something that happens with knowledge and effort.

Will and two grandsons are obviously having fun! How this photo should be categorized depends on who you ask; Will would say it is great. 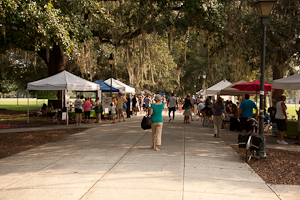 Local events can provide a great opportunity for shooting street scenes, one of my favorite types of photography. Forsyth Park in downtown Savannah is the site for a farmer’s market every Saturday morning from early April to late November. The hours are from 9 a.m. until 1 p.m. Visitors can purchase fresh vegetables, flowers, plants, herbs, pasta, breads, and meats from local farmers and vendors. Many of the foods are certified organic. The vendors are typically very friendly and helpful in making selections. Park benches provide a place to cool off in the shade, in addition to a place of solitude to read and relax. Frequently there are other activities going on in the park such as exercise classes, and on this Saturday, a rugby tournament. All in all, a good place to spend a Saturday morning.

When taking photos in varying light conditions such as bright sunlight and the shade, adjustments are needed to prevent people-pictures from being blown out (too bright) or too dark. If your camera permits, taking bracketed shots can make the process easier. For instance, I set my camera to shoot a 3-shot “burst,” the first correctly exposed, the second 1 f-stop under, and the third shot 1 f-stop over exposed. Another way to compensate for varying light conditions is to use the EV (exposure value) button that has a +/- on or by the button. This allows you to increase or decrease the exposure as needed. What ever you do, HAVE FUN!
Click on the image to view the gallery and the back button to return to the blog. 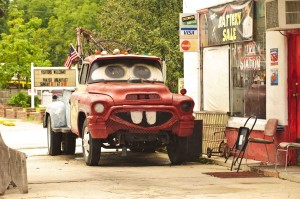 Certain things in photography are so basic I hate to mention in a photo blog, but I will anyway. Always have your camera with you, and never go back for a shot. You cannot take a photograph, at least a high quality one, if you do not have your camera. Yeah, I know that the device in your pocket or purse that you receive text messages and a rare phone call on can take photos – give me a break. I am talking about a real photo. If we agree on point one, let’s go to number two. If you plan to go back and take a shot, odds are it will not be there, or at least the lighting will have changed dramatically.

My wife and I were driving back from Charleston to Savannah. On the far side of a small town (a really small town), Cottageville, S.C., I, all of a sudden, turned the car around, and my wife wanted to know what was going on. We had just passed the “real” Mater, and I had to get a shot. For those of you without small children or grandchildren, Mater, a tow truck, is one of the main characters in a Disney movie called Cars 2. I present the real thing. Please share with all the small children you know.