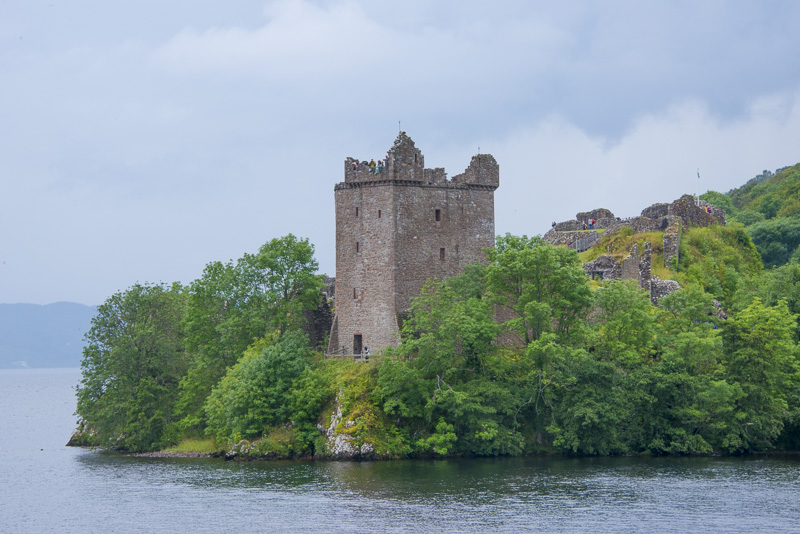 Travel photos can be easy or a challenge. My wife and I were fortunate to recently go to northern Scotland, a destination to which we had not previously traveled. In writing this blog, my initial plan was to describe history and details about the locations, etc. Since this is a photography blog, I thought this would be BORING.  This is an abbreviated account of the trip. By the way, over time I will be printing and framing select photos from the trip to hang in my office and make available for sale. Come by and take a look.

The first few shots were street scenes in Inverness where the trip began. The River Ness can be seen in several. The river is connected with a series of locks to the Loch Ness, the home of the famed Monster. Just for fun, I took a double exposure (in the camera, not manipulated in Photoshop) of ornamental branches decorated with holiday lights superimposed over bottles of scotch whisky on glass shelves; the location was a restaurant where we had lunch. The best way to see the photos is to click on the first and use the “right arrow” to view at your own pace. If a gallery contains more than 20 photos, close the last photo and go to the next section in the gallery – a little bit of trouble but worth the effort.

The Lord of the Glens, a small passenger ship was our home for the next part of the journey. At the end of Loch Ness, our next overnight stop was in Fort Augustus. Then, we sailed through Loch Lochy, south of Loch Ness, before going into the North Sea with stops in the Inner Hebrides, islands off of the northwest coast of Scotland. The photos show the scenery as we passed, as well as other passengers and crew on board the ship, and a few local animals. We docked every night affording opportunities to see local attractions. Some destinations did not have facilities to dock, in which cases we rode local ferries.

Comments about a few of the photos: One photo is taken from the interior of the ship looking out into Loch Ness. The next is of Castle Urquhart, a favorite spot for Nessie sightings. One of the crew celebrated his birthday during the trip and got kisses from two of his attractive crew-mates. At one of the many castles we saw, a group of children were playing, and I could not resist a photo of this darling. The photo of a man cutting the grass is boring except for the fact that he had on a tie. Pictures of food (this of a delicious dessert on board ship) can always add interest to documentation of travel. I had to include a photo of a scotch whisky distillery in Scotland. A couple of things about scotch – the first is that it is called whisky and not scotch in the British Isles. The second is that it is enjoyed with just a wee bit of distilled water added and not over ice.

Comments about travel photography: it is hard to travel with and use off-camera lighting such as big studio strobes, and photos taken with popup flash usually look like a flash picture – not desirable. The best alternative is to use available light which means having a camera with a high speed sensor (I shot some photos at ISO 6400) and/or having a light-weight tripod. Another concern when doing travel photography is what lenses to bring. On a trip a few years ago, my photo backpack weighed 45 pounds – I will never do that again. A mentor of mine, Jay Maisel, famously states “the more lenses you have, the fewer pictures you will take.” On this trip, I had a 27-300 mm f3.5-5.6 lens and a 45 mm f2.8 tilt-shift lens. I used the second lens very little.

Back to comments about photos: some photos should document location. The Old Forge Inn in Inverie is the remotest pub and restaurant on the British mainland. Marshall and a number of other passengers (including me) on the ship enjoyed the refreshments and comradery the inn had to offer. The only way to and from the location is by boat or a 16 mile hike from Kinlochourn. The only photo in this series I did not take was one of me and my wife when I asked a passerby to take the photo. On the next leg of the trip, a Viking Longboat from Denmark crossed our bow.  Then, the trip onboard the ship was celebrated with a farewell dinner. We were served haggis; the rest of the meal was delicious. If you are not familiar with haggis, it is a combination of sheep’s heart, liver, and lungs with onion, oatmeal, and a few other ingredients that is encased into the stomach and cooked for several hours. The photo with the knife shows it being sliced in a celebratory fashion to serve at our dinner.

A photo taken in a restaurant in Edinburgh shows the beginning of the last leg of the trip. There are a number of photos of the famed Edinburgh Castle, both from a distance and on the castle grounds. The Edinburgh Military Tattoo is an annual celebration of music and entertainment that brings together thousands of people from all over the world with no lack of pomp and ceremony. It concludes with a phenomenal fireworks display. The remaining photos were taken in Edinburgh, including the one of the bow of The Royal Yacht Britannia, shot through a “porthole.” Enjoy!